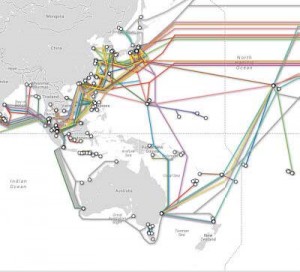 We hear this a lot – clients looking to solve why their programs are running so sluggish when accessed by their offshore team. There are additional complexities when relying on international connectivity. Your BPO and your onshore office might have the best possible connections when working locally (and both report that neither has experienced issues in the past) however, if the path between them isn’t optimised, suddenly… there are problems.

The first thing to understand about network speeds is latency which is a separate parameter to bandwidth. Many people are somewhat familiar with the term bandwidth, often overlooking the equally important concept of latency.

Latency is the measure of the time it takes for data to get from your office or cloud server in Australia to your BPO. Excessive latency creates bottlenecks that prevent data from filling the network pipe.

Something that contributes towards latency is the path your information takes. Take a look at this submarine cable map to understand how information travels across the world via the internet. This is the physical part of the world wide web that most people aren’t aware of. This is how bottlenecks and slow speeds are created.

So what can you do?

First – we recommend at least performing basic tests such as “trace route” or “ping” which can test your latency to your BPO. Also known as the ’round trip’ time. It’s not the only way to test latency, but it’s the most common. Performing the right tests will allow you to pinpoint where the problem is and who is responsible for resolving it rather than the all too common finger pointing blame game – a back/forth between your provider and your BPO on who’s end the problem is at. Once the bottleneck is identified conclusively, the resolution is often quick and easy. 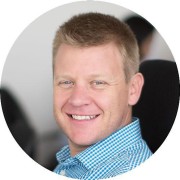 Entrepreneur and technology enthusiast, Jamie launched his first IT company at the age of 25. He’s worked with companies all over Australia, Britain and the Philippines. Now he enjoys helping multinational companies succeed offshore.

A combination of Process and Technology is our 'secret sauce' for achieving a scalable global workforce.

For over ten years now we have helped multi-site companies increase their productivity through better process and IT systems. With improved productivity comes bigger margins, more 'throughput' and faster growth. Using our skilled team and advances in technology, building a better business is easier than ever.