Unless you’ve spent some time in the Philippines, it can be difficult to recognise how to motivate, train and performance manage your new team members in the Philippines. ‘Aren’t they just like your staff at home in Australia?’ you may ask. The answer is yes and no.

As evidence based learning, a Dutch social psychologist and anthropologist named Geert Hofstede pioneered global team work for IBM in 1965 as a management trainer. He subsequently dedicated the rest of his working life to the topic of cross-cultural collaboration. Hofstede’s books have appeared in 23 languages between 1981 and 2011, listed more than 9,000 articles in peer-reviewed journals citing one or more of Geert’s publications. This makes him the currently most cited social scientist. It’s fair to say that his learning was valued globally and most of the major multinational companies built their cross-cultural models based on it.

He defined what he calls 5 cultural dimensions which are – Power Distance, Individualism, Uncertainty Avoidance, Masculinity and Long Term Orientation as characteristics that impact on how a nation approaches work. More specifically to working with Filipinos, we can see the comparison between our respective cultural dimensions: 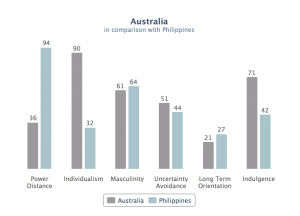 Note the broad differences around Power Distance, Individualism and Indulgence. Summarily these mean:

Power Distance is defined as the extent to which the less powerful members of institutions and organisations within a country expect and accept that power is distributed unequally. It has to do with the fact that a society’s inequality is endorsed by the followers as much as by the leaders.

Australia – scores low on this dimension (36). Within Australian organizations, hierarchy is established for convenience, superiors are always accessible and managers rely on individual employees and teams for their expertise.  Both managers and employees expect to be consulted and information is shared frequently.  At the same time, communication is informal, direct and participative.

The Philippines – At a score of 94, is a hierarchical society. This means that people readily accept a hierarchical order in which everybody has a place and which needs no further justification. Hierarchy in an organisation is seen as reflecting inherent inequalities, centralization is popular, subordinates expect to be told what to do and the ideal boss is a benevolent autocrat.

The fundamental issue addressed by this dimension is the degree of interdependence a society maintains among its members. It has to do with whether people´s self-image is defined in terms of “I” or “We”. In Individualist societies, people are supposed to look after themselves and their direct family only. In Collectivist societies, people belong to ‘in groups’ that take care of them in exchange for loyalty.

Australia – with a score of 90 on this dimension, is a highly Individualist culture. This translates into a loosely-knit society where there is an expectation that people look after themselves and their immediate families.  In the business world, employees are expected to be self-reliant and display initiative.  Also, within the exchange-based world of work, hiring and promotion decisions are based on merit or evidence of what one has done or can do.

The Philippines – with a score of 32, is considered a collectivistic society. This is manifest in a close long-term commitment to the member ‘group’ – be that a family, extended family, or extended relationships. Loyalty in a collectivist culture is paramount and over-rides most other societal rules and regulations (including your company). The society fosters strong relationships where everyone takes responsibility for fellow members of their group. In collectivist societies offence leads to shame and loss of face, employer/employee relationships are perceived in moral terms (like a family link), hiring and promotion decisions take account of the employee’s in-group, management is the management of groups.

This dimension is defined as the extent to which people try to control their desires and impulses, based on the way they were raised. Relatively weak control is called “Indulgence” and relatively strong control is called “Restraint”. Cultures can, therefore, be described as Indulgent or Restrained.

Australia – With a high score of 71, is an Indulgent country. People in societies classified by a high score in Indulgence generally exhibit a willingness to realise their impulses and desires with regard to enjoying life and having fun. They possess a positive attitude and have a tendency towards optimism. In addition, they place a higher degree of importance on leisure time, act as they please and spend money as they wish.

The Philippines – With a low score of 42, the culture is one of Restraint with a tendency to cynicism and pessimism. Also, in contrast to Indulgent societies, Restrained societies do not put much emphasis on leisure time and control the gratification of their desires. People with this orientation have the perception that their actions are Restrained by social norms and feel that indulging themselves is somewhat wrong. 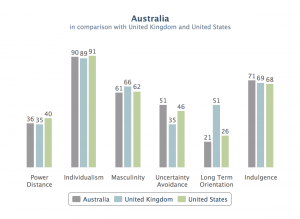 If we look more broadly at the United States and the United Kingdom, you’ll see that they follow a similar pattern to Australia, with exception Long Term Orientation. For more information on these categories, or to compare different countries than the ones spoken about here visit his website here.

So now that you have this information – what’s next? While this research can serve as a helpful guide, it’s also good to keep an open mind and not over think the differences. As you build working rapport with your Filipino workforce, you’ll begin get a feel for your team’s personality relative to their culture and how to best manage that.

A combination of Process and Technology is our 'secret sauce' for achieving a scalable global workforce.

For over ten years now we have helped multi-site companies increase their productivity through better process and IT systems. With improved productivity comes bigger margins, more 'throughput' and faster growth. Using our skilled team and advances in technology, building a better business is easier than ever.